He was born on 28th of February 1966 in Bitola and baptized as an Orthodox Christian named Zoran. He completed his primary school and mathematical high school in his native town achieving excellent average result. During his education, he was awarded for achievements in the field of science and sports several times. After he served his military obligation in Sarajevo in 1985, he started his studies at the Faculty of Civil Engineering in Skopje. He had finished the aforesaid Faculty before the time expected (in 1990), and enrolled the Faculty of Theology in Belgrade the same year, and he also got employed as a civil engineer with the Diocese of the Metropolis of Bitola. He established the Metropolis Library in collaboration with the local University Library of Bitola, being the first librarian thereof. He had given a cycle of lectures in the premises of the library during his two and a half years long employment with the Metropolis. In 1993, he left for Belgrade aiming to intensify his studies of theology and graduated in June, 1995. He started his master’s studies the same year in Belgrade, at the Department of Systematic Theology (Dogmatics). At the end of 1995, he left for Greece (Thessalonica) for the purpose of learning Greek and enrolment of post graduate studies. Now, he works on his doctoral dissertation, theme being: "The Unity of the Church and the Contemporary Ecclesiological Problems”.

He was ordained to be a monk on 7th of February 1998, being named John and ordained a deacon the same day. He was ordained into the rank of hieromonk on 8th of February 1998, and into the rank of a Bishop on 19th July 1998, being given the title Bishop of Dremvitza. He was assigned to be a vicar of the Bishop of Prespa and Pelagonia, also holding cycles of theological discussions and starting a thorough reconstruction of the Cathedral Church of St. Great Martyr Demetrius in Bitola besides his regular ministries. In March 2000, he was assigned to be Administrator of the Metropolis of Bregalnitza, and elected to be a Bishop of Veles and Vardar Valley in November 2000. He was enthroned at the aforesaid Bishopric on 4th December 2000. He had answered positively at the summon to liturgical and canonical unity with the Patriarchate of Pec by the Patriarch of Serbia Paul, together with all his clergymen and faithful people from his Metropolis, being the only Metropolitan of the schismatic Macedonian Orthodox Church who answered positively. The liturgical and canonical unity with the Patriarchate of Pec of the Holy Metropolis of Veles and Vardar Valley, being under his jurisdiction in that time, was reached on 22nd June 2002. Several days thereafter, he was expelled from the seat of the Metropolis together with the monastics living with him, completely illegally and without a court warrant by means of brutal force by the Police of the Republic of Macedonia. On 23rd of September 2002, he was appointed an Exarch of all the territories of the Orthodox Ohrid Archbishopric by the Assembly of the Serbian Orthodox Church. He had been detained under custody many times by the authorities of the Republic of Macedonia, which in fact created the schism of the Church during the times of communist rule, supporting the putsch of proclamation of the uncannonical autocephaly of the Macedonian Orthodox Church. He was elected a Chairman of the Holy Synod of Bishops of the Orthodox Ohrid Archbishopric on 25th December 2003, after the constitution thereof. He was sentenced to a suspended punishment one year of imprisonment for the criminal offence «performing unauthorised activities» because he had entered a Church aiming to baptise a female infant in 2004. The Court of Appeal in Bitola sentenced him to eighteen months of imprisonment in 2005 with valid judgement for a criminal offence «incitement of ethnic and religious hatred, discord and intolerance».

He participated in many international symposiums and gave lectures on numerous seminars.

On 24th May 2005, on the Feast of the Ss. Cyril and Methodius, he has been confirmed by his Holiness, the Archbishop of Pec and Metropolitan of Belgrade and Karlovtzy and Patriarch of Serbia, kyr kyr Paul, to be Archbishop of Ohrid and Metropolitan of Skopje in accordance with the Nis Agreement. On the same day, there was an announcement of the Patriarchal and the Assembly’s Tomos for Autonomy of the Orthodox Ohrid Archbishopric, the Chairman of whose Holy Synod of Bishops is he, himself. 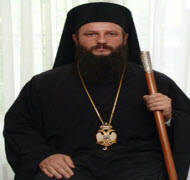